THE Portuguese prime minister Mr António Costa, the Spanish premier Mr Mariano Rajoy, and the European Union’s (EU) transport commissioner, Mrs Violeta Bulc, attended a ceremony in Elvas on March 5 to launch the start of work on a €509m project to construct a rail link to Badajoz in Spain. 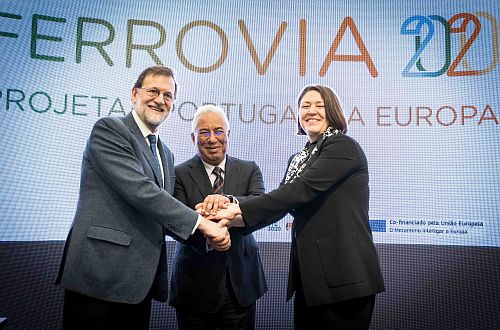 Rojoy, Costa, and Bulc at the ceremony in Elvas.

Portugal is contributing €277m to the project with the EU funding the remaining €232m.

When the project is completed in 2022 it will provide a new rail link between the Portuguese ports of Lisbon, Setúbal and Sines and Spain. Costa described the project as “the largest new railway line work of the last 100 years,” and said the link will reduce transport costs from the three ports to Spain by 30% and shorten the distance by 140km.

The project not only forms part of the trans-European rail network, but is also one of the schemes in Portugal’s €2bn 2020 railway plan which includes upgrading 1200km of line and electrification.

Later that day, Portugal’s minister of planning and infrastructures, Mr Pedro Marques, and Bulc presided over a ceremony in Covilhã to mark the start of an €85m project to reopen and electrify the 46km Covilhã - Guarda line, which closed 10 years ago.