CZECH railway infrastructure manager SŽDC has narrowed the options available to fix the sinuous and congested Prague - Beroun section of the Prague - Pilsen main line down to three, the company confirmed during a meeting near Prague Smíchov station on October 4. 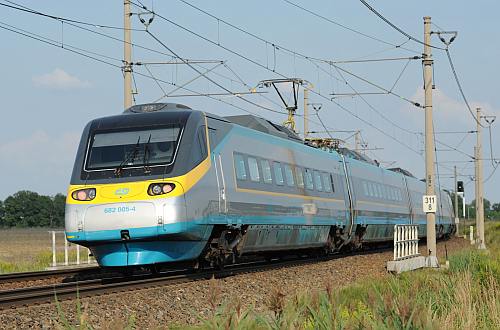 Research is underway into the remaining options and the results of the study, which is considering the various routes available with a focus on economic impact, are expected early next year.

The three remaining options are:

The new line will be designed for both passenger and freight operation with a maximum speed of 200km/h.

SŽDC says optimisation of the current low-speed line along the Berounka River, which is due to begin next year and will take several years to complete, will not provide enough capacity as suburban, passenger and freight operators are already requesting more than is available. The line is designated “congested.”

The volume of transport on the existing Prague Smíchov - Beroun line will be severely limited due to the high noise levels. The desired journey time of 60 minutes will also not be achieved if the current line is merely upgraded, as the fastest journey time is currently 1h 30min using Alstom-built class 681 Pendolino tilting trains operated by Czech Railways (ČD).

The 2019 timetable, which comes into effect on December 9, includes a 9-10 minute reduction in Prague - Pilsen journey times with the opening of a cut-off section, which reduces the length of the Prague - Pilsen line by 6.1km, and a new 4.1km tunnel near Ejpovice, just east of Pilsen, on November 15.

SŽDC director of strategy, Mr Radek Čech, says a new line, operating with new trains, will reduce travel times between Prague and Pilsen considerably while delivering an increase in capacity for regional passenger transport, which is steadily increasing. A new line will also lower the noise burden in the most populated regions. Option F will considerably shorten journey times for diesel-operated passenger services between Prague - Přibram, which travel via Beroun.

The disadvantages of the project is the high investment cost, in particular for variant B and C, which includes a tunnel between Beroun and Prague. Investment for variant C would cost Korunna 50bn ($US 2.2bn). Options B and F would see trains operating on the current track which would result in a higher noise burden. All options may raise concerns from local governments as many of the villages and towns between Beroun and Hořovice are against the development if it is constructed above ground.

“The technical and transport-technological solution is basically completed, and processing of the transport prognosis and economic assessment is underway.” Čech says. “Based on these assumptions, the study should be completed in January 2019. The first preliminary outcome of the economic evaluation of all variants is expected in October this year.”