PASSENGER Rail Agency of South Africa (Prasa) has announced further drastic cuts to its mainline train timetable even as it pushes ahead with a €250m deal to buy 70 new locomotives from Vossloh. 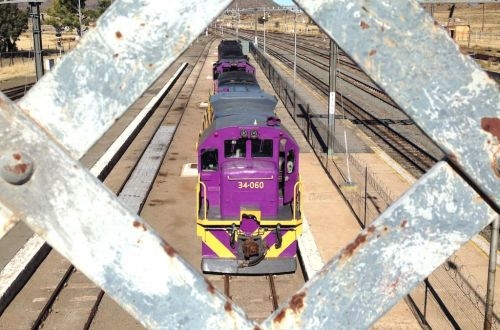 A trio of Prasa locomotives idle the day away at Rosmead Junction in the Eastern Cape, South Africa.
Photo Credit: Paul Ash

Prasa said cost coverage on certain routes was below 20%.

South Africa's passenger train services have been steadily whittled away for years, with the advent of cheaper and more efficient minibus taxis in the 1980s, along with the recent growth of no-frills airlines, there have been sharp declines in the number of people using long-distance trains.

Matters have not been helped by the government's decision in 2010 to cut Shosholoza Meyl's operating subsidy, leaving the train operator to fund operations through ticket sales alone.

The announcement follows the unveiling of Prasa's first 4000-series diesel locomotive in Cape Town this month, which are due to begin entering service in March and will replace elderly and unreliable locomotives handed down from Transnet Freight Rail.