THE Netherlands government has decided to reconstruct and expand Amsterdam Central and Amsterdam South stations in order to improve accessibility to the Dutch capital and increase the capacity of the city’s rail network. 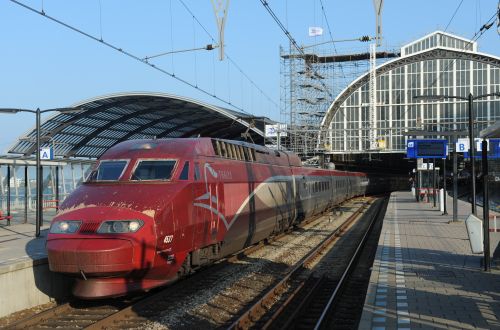 Under Prorail's plan, Thalys services will be diverted from Amsterdam Central to Amsterdam South.

Passenger numbers through the Amsterdam are expected to grow considerably in the coming decades, with the number of passengers using Amsterdam South forecast to grow from about 80,000 daily passengers today to around 250,000.

Major changes are taking place around Amsterdam South station. The Zuidasdok project, which was approved in early 2017 and is scheduled for completion in 2028, involves the construction of office and apartment buildings on a deck covering the A10 motorway and the parallel mainline railway and Amsterdam metro tracks.

However, the government has decided to make changes to the project, including the expansion of Amsterdam South from four to six platform tracks, which involves the construction of a third island platform. This will cost about €200m, €35m of which will be financed by the Greater Amsterdam public transport authority. An additional track will be constructed east of Amsterdam South to enable trains to reverse.

Amsterdam South will become the city’s main station, with international services from Berlin, Frankfurt and Brussels calling there instead of Amsterdam Central. IC Direct, the domestic inter-city service to Rotterdam and Breda, will also call at Amsterdam South.

Around €150m will be spent on expanding capacity at Amsterdam Central from 34 to 57 trains per hour as part of the Dutch high-frequency project. This will allow inter-city and commuter services to operate at 10-minute intervals.

To achieve this, Amsterdam Central, which was originally built as a double terminus station with most trains terminating there, will be turned into a through station allowing more trains to operate over fewer tracks. However, Netherlands Railways (NS) and freight operators have publicly objected to Prorail’s plan to remodel Amsterdam Central and increase the number of through services.

The number of platform tracks will be reduced from 10 to nine, while the central through tracks without platforms will be removed. The extra space will be used to widen the existing platforms which are too narrow for the number of passengers currently using them let alone the predicted increase in passenger volumes.

Constructing extra tracks at Amsterdam Central is very difficult due to space constraints but the secretary of state for infrastructure, Mrs Stientje van Veldhoven, has kept the option open for a 10th platform track, which NS says it needs.

The works at Amsterdam Central are scheduled to be completed in 2030.