THE Dutch rail network is set for a new train kilometre record, with the 2019 timetable showing an expansion of train services. However, infrastructure manager Prorail warns the increase is making it increasingly difficult to allocate track capacity among train operators on the Dutch network. 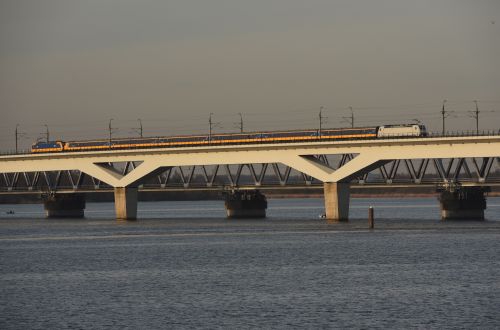 Prorail, which allocates track capacity, is urging the Dutch government to invest in the network and has warned that by 2030, the congestion will severely affect train performance.

Prorail is also asking train operators to innovate and make their operations smarter to save track capacity and says it is trying to optimise track capacity allocation. That move has been supported by the CEO of Netherlands Railways (NS), Mr Roger van Boxtel.

In the 2019 timetable, more than 2.2 million passenger trains will be operated on the Dutch rail network, running a record number of 165 million train-km, compared with 129 million train-km in 2004. In addition, 8% more freight trains are planned in 2019 compared with 2018, while train operation and punctuality should benefit from a reduction in the amount of track works which limit the capacity.

An extra path has been created on the HSL-South high-speed line which has enabled NS to introduce an extra service, while freeing up space on the parallel lines of the conventional network. NS is operating IC Direct services with trains consisting of ICRm coaches with a Traxx locomotive at each end four times per hour per direction, and has announced the launch of a direct Amsterdam - Breda - Brussels intercity train using the same configuration, to provide a fifth service on the line.

ICE trains, operating the Amsterdam - Frankfurt high-speed service, will have a three-minute time saving between Amsterdam and Utrecht.

A new passenger operator is set to begin operation on the Dutch network in 2019. QBuzz, once owned by NS but now a subsidiary of Italy’s Trenitalia, will operate Merwedelingelijn regional train services between Dordrecht and Geldermalsen from mid-December after it was awarded the new concession from the province of South Holland. QBuzz will take over the GTW trains from the incumbent operator, Arriva Netherlands.

Parking as a service

With the expansion of the number of train-km and the increase in rolling stock, Prorail has pointed out that there are insufficient stabling facilities, with quick measures needed to create more capacity. As an incentive, Prorail will start to consider “parking as a service” offered to train operators. This change will enable Prorail to oversee and control the available capacity better and optimise capacity allocation.

Prorail says it is planning measures to keep the rail system operational despite the challenges. Simply expanding the infrastructure through new investment is not seen as the right solution and Prorail is looking at innovations to optimise the capacity of the existing infrastructure.

This includes using a Time Table Redesign (TTR) tool, which enables better planning of train movements. With TTR, it expects to have more opportunities for ad hoc operation of trains without affecting the standard timetable structure. Freight operation will particularly benefit from the change, as 96% of the scheduled freight trains in the Netherlands change in time or place from their initial schedule.

Prorail will also introduce scheduling in tenths of a minute, with six second increments, for internal timetables. Prorail believes this system will improve punctuality, and expects to introduce the change in 2020.