RDC Deutschland finally began operation of its new Autozug Sylt car-carrying service from Niebüll to Westerland on the island of Sylt on October 18. 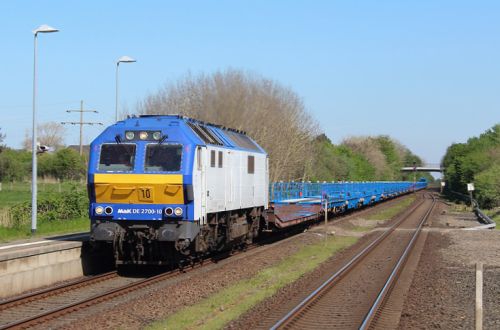 The services use a specially-leased rake of flat wagons - initially running as a short formation capable of carrying around 30 road vehicles - and a class 251 diesel locomotive, supplied by Transdev subsidiary NOB.

The service was originally due to start operating earlier this year although delays in gaining a safety case for the use of freight wagons for passenger transport and the method of operation pushed the launch back. RDC trains will use existing DB-owned terminals at both Westerland (Sylt) and Niebüll.

From October 18 to December 10 there will only be two return Autozug Sylt services a day due to engineering work on the route, and none at all during the week commencing November 7, although the competing DB-operated Sylt Shuttle will continue to operate a reduced service.
Until December 10 Autozug Sylt departures from Westerland (Sylt) will be at 09.25 and 13.25 with return trips from Niebüll at 10.30 and 15.30. For the first three weeks of operation there will be a €25 promotional fare. The standard fare will be €45 - less than the €52 charged by DB for its its Sylt Shuttle service, although both operators offer discounts for bulk ticket purchase and slightly lower prices mid-week as traffic peaks heavily at weekends.

From December 11 RDC will operate seven return trips daily with the earliest train leaving Sylt at 04.55 and the final departure from Niebüll at 21.30.

DB increased the frequency of its competing service to 26 train pairs daily from December 2015, which has reduced the number of paths available for competing RDC operated Autozug Sylt trains.