THE renovated and rebuilt Negrelli viaduct in Prague was officially inaugurated by Czech prime Minister, Mr Andrej Babiš, following a three-year project in a ceremony held on May 29. 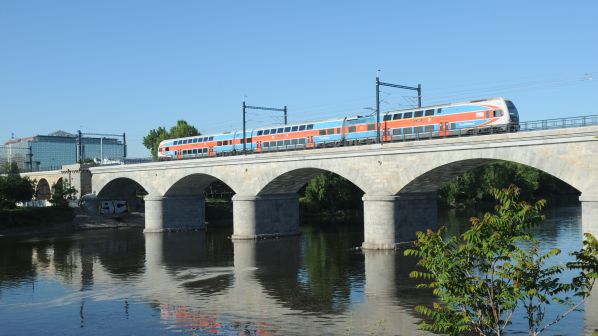 The upgraded Negrelli viaduct was inaugurated on May 29.
Photo Credit: Quintus Vosman

Built in 1850, the 1150m double-track bridge crosses the Vltava River and continues through the Karlín area of the city, connecting Praha Masarykovo station with Prague Bubenec station. A branch was added in the 1970s to connect a direct connection between Prague Bubenec and Prague Libeň.

The renovation project, which began in April 2017, sought to maintain the viaduct’s existing empire style. Work involved reconstructing 100 brick, sandstone and granite vaults, eight of which cross the Vltava River. Parts of the bridge were found in a worse state than expected, particularly after the railway superstructure was removed. A total of 19 vaults were completely reconstructed, which lead to an increase in costs and delays with completing the project.

The project has helped to increase line speeds on the viaduct from 40km/h to 60km/h and capacity to up to 14 trains per hour. Anti-noise and vibration measures have also been installed. During the reconstruction works the regional trains from Kralupy nad Vltavou to Praha Masarykovo have been diverted via Praha Holešovice, while trains to and from Kladno had their terminus at the improvised single platform Prague Bubenec Vltavská station.

Funding for the Koruna 1.96bn ($US ) project was provided by the European Union (€37m), and the Czech national fund for infrastructure, which provided the remaining €36m. Babiš was joined at the inauguration ceremony by minister of transport, Mr Karel Havlíček and the general director of the Czech rail infrastructure manager SŽ, Mr Jiři Svoboda. Minor work is set to continue on the viaduct until November.