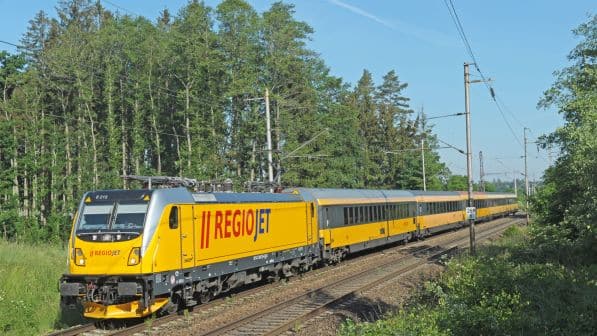 CZECH open-access operator RegioJet has been granted a unified safety certificate that will enable it to operate passenger trains on the German railway network. The certificate was granted at the end of last month.

RegioJet considers Germany to be an economically and geographically important market, and the granting of the safety certificate marks a significant step forward in its plans for expansion.

It is also a major step forward in the development of the RegioJet network across central Europe, as in addition to the new routes it has announced within and to Germany the company is planning to extend its operations further to the west.

However, RegioJet has confirmed to IRJ that it is not involved in the Brussels - Berlin overnight service that European Sleeper is planning to launch on May 25, or at least not at its current stage of development.

“We have now received a certificate from the European Union Agency for Railways (ERA), which will allow us to develop new lines not only with a destination station in Germany, but also connections going through Germany to Western Europe within a few years," says Mr Jakub Svoboda, executive director of RegioJet Transport.

RegioJet’s safety certification to run passenger trains in Austria, which since March 2022 has enabled it to operate with its own staff in that country, has now been extended to include freight operations.

The open-access operator also holds safety certificates to run passenger and freight services in the Czech Republic, Slovakia and Poland.

It operates in Hungary in partnership with local company Continental Railway Solution (CRS), which is involved in the weekly RegioJet freight service between the Czech Republic and Hungary that was introduced in May 2022.

RegioJet is expected to considerably expand its freight operations in the near future. As regards traction, the company plans to expand its fleet of Alstom Traxx MS3 electric locomotives, which will require authorisation to operate in at least Germany, Poland, the Czech Republic, Slovakia, Hungary and Austria.