CZECH and Slovakian open-access passenger operator RegioJet announced on April 27 that it is planning to launch services between Prague and Vienna, beginning at the start of the 2018 timetable in mid-December 2017. 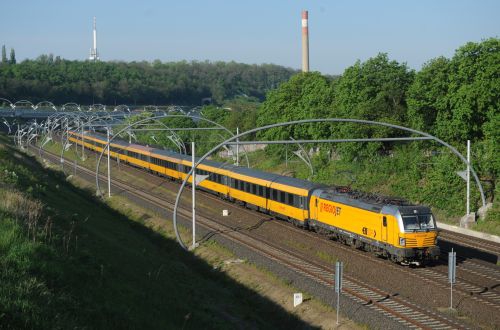 RegioJet will operate four return services per day between the Czech and Austrian capitals in partnership with Graz Köflach Railway (GKB) using the Austrian operator’s license and safety certificate.

RegioJet has filed requests for train paths with both Czech infrastructure manager SŽDC and its Austrian counterpart ÖBB Network.

While it has been confirmed that trains will serve Vienna’s new main station, it is not yet clear whether RegioJet services will call at other stations in the city. Other stops between Prague and Vienna may also be discussed.

RegioJet has confirmed that trains will stop at Brno, the capital of the Moravia region, and the Czech border station of Břeclav.

This means there will be a significant increase in RegioJet frequencies between Prague and Brno, which is already served by the operator’s three daily Prague - Bratislava services. This will increase competitive pressure on Czech Railways (ČD), which operates a regular-interval Railjet service on the Prague - Brno - Vienna - Graz route in partnership with Austrian Federal Railways (ÖBB).

It is not clear where the additional locomotives and coaches will be used, although RegioJet intends to add seating capacity and increase frequencies on existing routes.

RegioJet is already active in the Austrian long-distance bus market, operating services from Vienna and Vienna airport to destinations in the Czech Republic and Slovakia.

RegioJet carried around eight million passengers by train in 2016 and a similar number on its bus services.