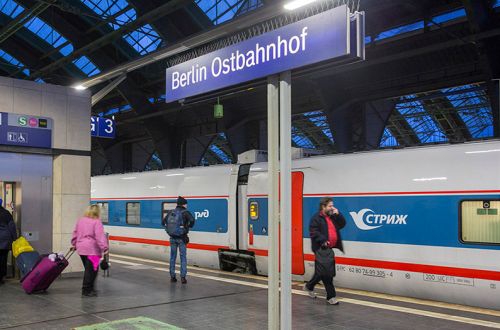 The journey time for the westbound service has been cut from 24h 49min to 20h 14min while the eastbound train will complete the trip in 20h 35min, compared with 25h 56min previously.

“For many years, there was a problem with a rapid transition from European to Russian gauge, but now that problem is solved,” Belozerov says. “The railways should unite, and today we have modern rolling stock, which will make the transition between gauges in just 20 minutes.” Previously the process of swapping between 1520mm-gauge and 1435mm-gauge bogies at the Belarusian-Polish border took around two hours.

The services operate twice weekly, departing Moscow Kursk at 13.05 on Saturdays and Sundays, arriving at Berlin East at 07.19 (local time) the following day. The return working departs from Berlin at 18.50 on Sundays and Mondays, arriving in Moscow on 17.25.

Each 20-car train is formed of 18 passenger coaches and two technical cars, with dining and bistro cars, and a mixture of first and second class seating coaches and sleeping cars. Deluxe sleeping cars are also provided with en-suite facilities.