SWEDISH open-access passenger operator Saga Rail (SR) has announced it has stopped operation of its sole service and lodged a complaint with the Swedish Competition Authority (SCA) until a dispute with incumbent national operator SJ is resolved, in protest at SJ’s refusal to offer SR tickets on SJ.se, the dominant online sales channel for train tickets in Sweden. 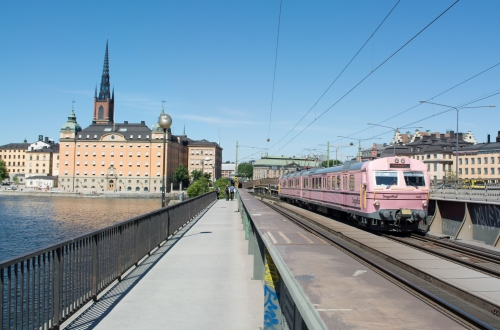 SR, which launched on February 23, stopped its twice-weekly weekend pink train service between Stockholm and Linköping on June 10 and lodged a complaint with the SCA on June 20, the third such complaint to be filed with the authority after open-access inter-city operator MTR Express instigated similar proceedings in April 2018 and April 2014. SJ.se currently offers most other public transport operators in Sweden, including Snälltåget’s tickets for its Stockholm - Malmö route and tickets for Blå Tåget on the Stockholm - Gothenburg route.

SR managing director Mr Mats Nyblom told IRJ it had been in discussion with SJ but this has since fallen through, and it is now hoping for an interim decision from the SCA to force SJ to offer SR’s tickets while the complaint is being processed, which could take at least a year depending on the authority’s workload.

“First we said we will stop over the summer but not now we don’t see any way forward with SJ,” he says. “They are in the dominant position in terms of sales and they can use this position to block anyone they don’t want to see on the market.”

Nyblom says the interim decision would barely affect SJ, as SR’s revenues will be less than 0.1% of SJ's, but a decision against them would have major implications for the smaller operator.

The complaint filed by MTR Express in February against SJ also claimed the incumbent operator was abusing its dominant position in the market by blocking access to its online sales portal.

When MTR Express launched its Stockholm - Gothenburg services in early 2015, tickets for the two other open-access inter-city operators already in the market - Blå Tåget and Snälltåget - were available through SJ.se but fares for MTR Express were not.