SWISS Federal Railways (SBB) has announced plans to launch a new Frankfurt - Milan service next year in cooperation with both Trenitalia and German Rail (DB). 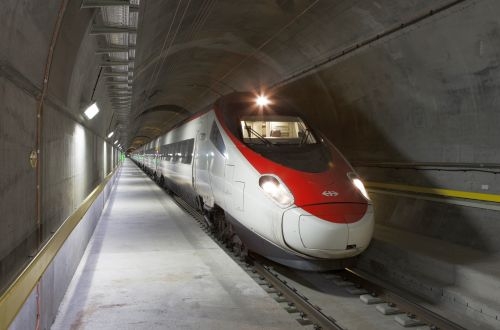 The northbound services will be routed via Lötschberg Base Tunnel and Bern, returning south via Lucerne and the Gotthard Base tunnel.

The new service will begin in December 2017 with only one train per day in each direction for the first three years. Frequencies may increase from December 2020 following the opening of the Ceneri Base Tunnel, which will reduce travel time on the Switzerland - Italy route by a further 30 minutes.

The ETR610 trains were tested in Germany in 2012 but do not have formal safety case approval although this is anticipated later this year. SBB has contracted Alstom to undertake a SFr 80m ($US 81m) programme of work to upgrade the seven ETR610 trains it inherited from the Cisalpino joint venture with Trenitalia. The extensive work to get the trains "fit for the Gotthard Base Tunnel" involves over 90 modifications to bring them up to the specification of SBB's more recent RABe 503 sets.