SWISS Federal Railways (SBB) will introduce a new service for tourists next year on the historic scenic mountain route through the Gotthard Pass called the Gotthard Panorama Express, in addition to a train aimed at hikers and a conventional RegioExpress service. 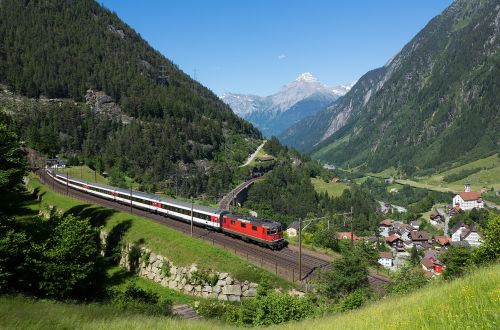 The Gotthard Panorama Express, which will have panorama coaches and restaurant cars, will run between Flüelen, Bellinzona and Lugano at weekends from April 14 to June 30 and daily between July 1 and October 22. Journeys can be combined with a steamer trip across Lake Lucerne from Flüelen to Lucerne. The new service will be marketed internationally, joining the ranks of similar premium Swiss Alpine narrow-gauge services such as the Glacier Express, Bernina Express and Golden Pass Panoramic.

In addition, SBB will provide a Gotthard Weekender service from Zurich to Belinzona between April and October which will stop at various stations on the scenic route. The train will have plenty of room for baggage and bikes, as it is expected to appeal to hikers and cyclists.

When commercial services begin through the Gotthard Base Tunnel on December 11, SBB will operate a conventional RegioExpress service at hourly intervals on the old line between Erstfeld and Bellinzona, with alternate trains going to Lugano every two hours. The service will link with the S-Bahn in Ticino, and will continue to offer direct services from Basle and Zürich to Göschenen at times when demand is likely to be heavy.