Swiss Federal Railways (SBB) has unveiled the restaurant cars for its new fleet of RABDe 502 (IC 200) double-deck intercity EMUs, which will gradually come into service following the launch of the 2019 timetable on December 9. 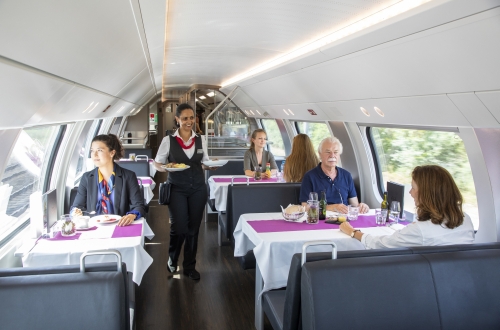 The new restaurant cars will have room for 30 passengers.
Photo Credit: SBB

The new restaurant cars, which feature a bright, modern layout and can accommodate up to 30 passengers, will initially be used mainly on the IC 1 services between Geneva and St Gallen.

With the commissioning of the new Bombardier IC 200 and Stadler Giruno trains, SBB says every Intercity and Eurocity services will begin to operate with a restaurant car over the next few years. This will see the expansion of the restaurant car fleet from 107 to 159 vehicles by 2021.

SBB says it is aiming to set itself apart from other modes of transport with the service, and launched a new menu in April which will be served on the new cars. That includes salad of cervelat and cheese, macaroni with beef sauce, shredded zurighese, chicken with Thai curry and soy spaghetti in salad.