A ceremony was held at Valjevo station in Serbia on November 15 to mark the official opening of the upgraded Resnik - Valjevo section of the Belgrage - Bar (Montenegro) railway, a project that was conducted by RZD International, a subsidiary of Russian Railways (RZD). 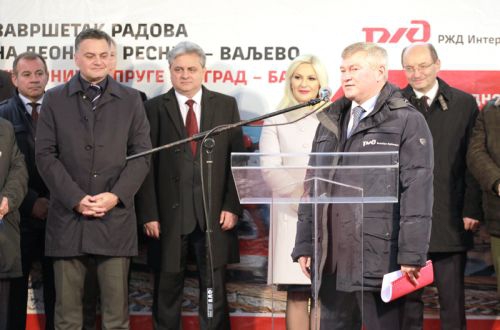 The $US 80m project involved reconstructing track subgrade and superstructure and five switches, as well as building two tunnels and 17 bridges, installing new signalling, telecommunications, alarm and contact systems, and repairs to infrastructure along the 77.6km route, including overhead electrification, 11 level crossings, 10 stations. The improvements have increased line speeds from 50km/h to 120km/h.

Work on the project began in July 2016 and RZD says it was completed on schedule despite delays caused by the holiday season. The ceremony was attended by Ms Zorna Mikhailovich, Serbia’s deputy prime minister and minister of construction, transport and infrastructure, and first president of RZD, Mr Alexander Misharin. Traffic on the Belgrade - Bar line resumed in July following the completion of the 35km Resnik - Vreoci section.

The project is the last of the three southern sections of TEN-T Corridor X which RZD has rebuilt under a $US 941m contract signed by the Russian and Serbian governments in March 2014.

RZD International also confirmed that it will start work in the first quarter of 2018 to upgrade the 40km Stara Pazova - Novi Sad section of the Belgrade - Budapest line after it signed a contract with Serbian Railways (ZS). Work will involve building a new double-track railway, which will feature three viaducts, a tunnel, 19 bridges and overpasses, and 36 smaller bridges. The project will also involve rehabilitation of stations along the route and will cost around $US 247m.

The project is part of a wider upgrade to the Belgrade - Budapest line, with a Chinese-Hungarian consortium responsible for the Hungarian section of the route.