SWEDISH national passenger operator SJ has revealed plans for major improvements on the Stockholm – Oslo route with the reintroduction of X2000 tilting trains, an increase in frequency, and dramatically improved journey times. 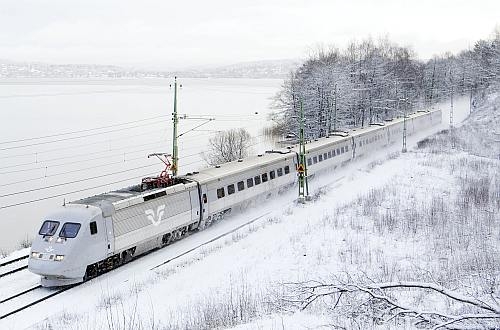 From August 9 SJ will replace the two daily Inter-City services between the Swedish and Norwegian capitals with three X2000 services, reducing the journey time for the 572km trip from 5h 38min to around four-and-a-half hours.

"The combination of shorter journey time, more departures, and more comfortable trains is our sharpest competitive offer for passengers on this route," says SJ's Stockholm – Oslo route manager Mr Petter Essen. "Every year 1.1 million passengers fly between the two capitals and many of them want to see a more environmentally-friendly option that is competitive with the journey time by air."

SJ previously operated X2000s to Oslo between 2000 and 2004 under its Linx 50:50 joint venture with Norwegian State Railways (NSB). However, competition from low-fares airlines led to a 40% decline in ridership and SJ decided to redeploy the trains on busier domestic routes.