SNCF says it will increase the frequency of the new Paris Austerlitz - Nantes and Paris Bercy - Lyon Perrache service in May. 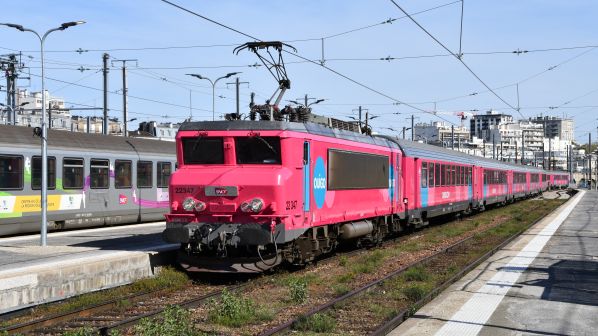 Unlike the Ouigo TGV services first launched in April 2013, now known as Ouigo Grande Vitesse, the new service is operated by locomotive-hauled trains running on conventional lines at a maximum of 160km/h.

OTC are operating between Paris Austerlitz and Nantes, taking between 3h30 and 4h15, which compares with just under two hours non-stop by TGV. The trains are serving Juvisy, Massy-Palaiseau, Versailles, Chartres, Le Mans and Angers or Juvisy, Les Aubrais (Orléans), Blois, Saint Pierre-des-Corps (Tours), Saumur and Angers. A second service is operating between Paris Bercy and Lyon Perrache calling at Villeneuve Saint-Georges Melon, Dijon, Chalon-sur-Saône and Mâcon, with a journey time of 4h 45min - 5h 15min.

Single fares range from €10 to €30 for adults. A flat fare of €5 applies for children under 12. Prices will be fixed from the opening of reservation, unlike those on TGV services which are subject to yield management variations. Large pieces of luggage will cost €5 and bicycles can be carried for €10. Tickets are only available to purchase online from the dedicated Ouigo website, mobile app or SNCF Connect. Reservations open 45 days before departure.

The service is operated using a fleet of nine Class BB 22200 dual-voltage electric locomotives built by Alsthom in the late 1970s/early 1980s and 36 Corail coaches from the same period. Each train consists of eight coaches, for a total of about 600 seats. The locomotives and coaches received a light overhaul and a new livery prior to the launch. The main work on the Corail stock is the installation of retainers for bikes with space for 16 bikes per train and the replacement of seat cushions and/or covers. Unlike Ouigo’s high-speed trains, on which the buffet-bar has been closed, a trolley service of snacks is available. All maintenance is carried out at night by the SNCF carriage depot at Masséna, just south of Austerlitz.

The launch on April 11 was disrupted for an hour by a union demonstration. Unions are aggrieved that the new Ouigo Train Classique service is not operated directly by SNCF but Oslo, a newly-formed wholly-owned subsidiary. Oslo has a staff of around 80, around half of which were recruited from SNCF.

Three members of staff work on onboard the trains: drivers, conductors, and on-board comfort and service staff. They are paid up to 20% more than conventional onboard staff but are expected to carry out additional duties. For example, comfort and service staff will keep the train clean while chefs de train have been trained to fix minor technical niggles, while all three are expected to carry out duties such as coupling and uncoupling coaching stock, usually carried out by SNCF ground staff.

Speaking to IRJ, Mr Christophe Fanichet, CEO of SNCF Voyageurs, said that 60,000 bookings were made up to the launch of the service, which is better than forecast and was boosted by higher travel over the Easter holiday. “We will be carrying around 1200 people a day and some trains are already fully-booked,” Fanichet says.

“We consider that three trains a day is sufficient on the two routes launched today. Such a service, with one train in the morning, one around lunchtime and one in the evening, can be operated with just two trains. In mid-May we will be able to boost Paris - Nantes from two to three train pairs and Paris - Dijon - Lyon from one to three pairs.

“If the test is a success, we will look to launch new routes wherever parallel car traffic is very heavy. In order to reach SNCF’s aim of doubling passenger traffic, equivalent to 200 million new passengers, we have set ourselves the task of gaining 1% of market share from roads every year.”