SWEDISH infrastructure manager Trafikverket has launched a consultation on three options being considered for the future funding and operation of overnight trains from Stockholm to northern Sweden following the completion of a study into the economics of the services. 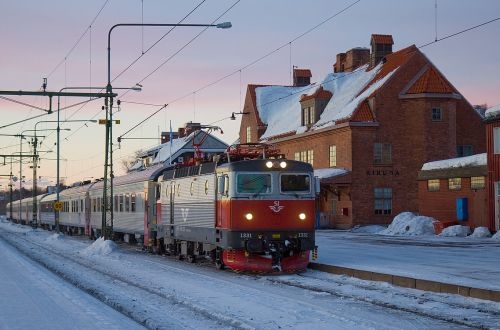 SJ currently operates two daily overnight services, Stockholm - Kiruna - Narvik and Gothenburg -Stockholm - Luleå, under a public service obligation contract, which expires in 2018. The state's contribution to the operation of these services is around SKr 100m ($US 12m) per year.

Under the first option, the two trains would continue to operate on the current basis beyond 2018, which would offer the greatest benefits to the tourist industry. However, Trafikverket says this is a costly option with ridership unevenly distributed between seasons.

Alternatively, the service could be reduced to one train per day, but the study warns this may result in poorer pathing on the Kiruna - Narvik line, where there is frequent heavy freight traffic and capacity would fall short of requirements during the peak tourist season.

The third option would provide two daily trains in the tourist season and one at other times. This would reduce costs and supply would be matched more closely to demand, reducing the cost of operation.

Trafikverket says it will not endorse one specific option until the consultation has been completed, but it expects to make a decision by October.