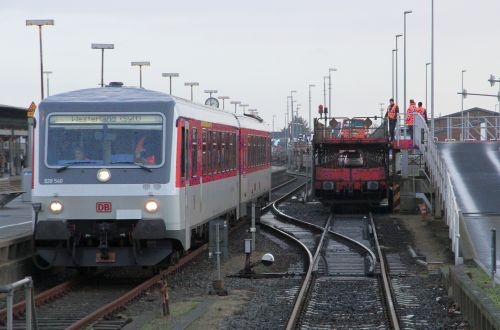 The trains, which RDC intends to start running commercially in February, will compete with the existing service operated by DB Fernverkehr under the Sylt Shuttle brand.

A class 251 six-axle diesel locomotive operated by Transdev subsidiary NOB is being used for the RDC training runs, which started on January 11, and NOB will also operate the new service. Between one and three daily round trips are planned for staff training until the service is launched.

In November RDC was awarded additional paths for its proposed service although it has still not been allocated all the capacity it sought from infrastructure manager DB Networks. Capacity on the route is is assessed as four trains per hour in each direction because of a 22.2km single-track section and mechanical signalling at both Niebüll and Westerland (Sylt) stations.

From December 13 DB began operating a completely new service on the route. Eight return Sylt Shuttle plus services operate daily between Bredstedt, 21.6km south of Niebüll, and Westerland on a commercial open-access basis without any state government funding. The trains are formed of repainted (but not refurbished) ex DB Regio class 628 DMUs which operate under their own power between Bredstedt and Niebüll, where they are coupled to the rear of the DB-operated Sylt Shuttle car carrying trains between Niebüll and Westerland.

Local media have reported these trains running virtually empty with DB employees advising potential users to use the existing faster regional services! One Sylt Shuttle plus DMU is extended to Hamburg at times when passenger demand will be low to non-existent, arriving at 01.00 and returning north at 04.00.

Local politicians have called on German regulators to terminate operation of the Sylt Shuttle plus DMUs and made it clear in statements in early January that they believe the new services are being run purely to absorb track capacity and block the competing car carrying trains planned by RDC.

RDC Deutschland managing director Mr Hans Leister told IRJ he agrees with the local politicians and that from his point of view "it is obvious that Sylt Shuttle plus is not a normal commercial train service, run in order to earn money by selling tickets," and that the only reason DB is operating the trains "is to get the paths in preference to RDC."

Alternative regional and intercity services are quicker than Sylt Shuttle plus and regional tickets are not accepted on the new service. Leister says his local employees have observed multiple trains running with few or even no passengers on board and IRJ's own observations in December confirmed this.