SLOVENIAN Railways (SZ) has awarded Stadler a contract worth more than €150m to supply 26 Flirt multiple units, exercising an option from a framework contract for Flirt and double-deck Kiss EMU sets awarded in April 2018. 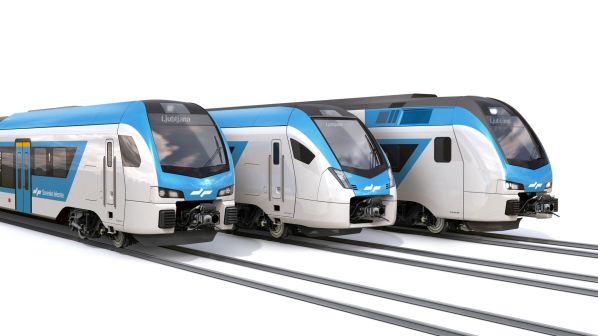 The latest order comprises 16 three-car DMUs and 10 four-car EMUs. The DMUs will be designed for regional operation by SZ and have a maximum operating speed of 140km/h. Like the original order, the trains feature an additional module which houses the diesel engines and some propulsion equipment.

The EMUs are also largely similar to the previous order. The trains will have a maximum speed of 160km/h and will operate cross-border services. As a result, the EMUs are equipped to operate with three different electrification systems - 3kV dc used in Slovenia, 15kV ac in Croatia and 25kV ac in Austria.

SZ will begin to introduce the new trains in October 2021.Stadler has also secured a contract from North Milan Railway for five Flirt diesel-electric trains under an option from a contract signed in November 2018.

The contract includes maintenance and FNM plans to transfer the purchasing option to Ente Autonomo Volturno, which will operate the trains on regional services around Naples.

For more information on rolling stock orders from around the world, subscribe to IRJ Pro.