Contract for seven trains is worth €280m. 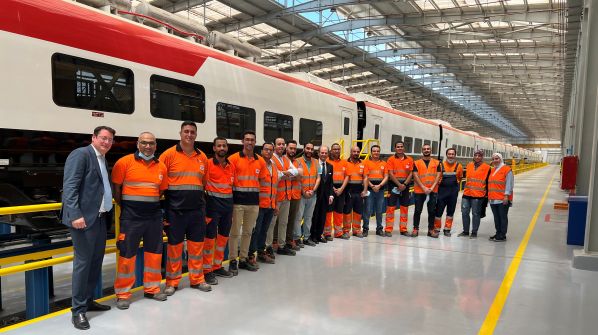 Talgo president, Mr Carlos Palacio, is seen here in Egypt with local staff and one of the ENR daytime trains.
Photo Credit: Talgo

Talgo says that the contract will enter into force once finance for the project has been agreed, which it expects to take place in the next few months.

The new overnight trains will be from the same product platform as the 64 inter-city coaches that Talgo is supplying to Danish State Railways (DSB), and the rolling stock it is building for German Rail (DB) under a framework agreement for up to 100 coaches.

Production will take place in Spain at the Talgo factory in Rivabellosa in Álava province, and at the Las Matas plant on the outskirts of Madrid. Deliveries are due to commence in 2024.

Talgo will be responsible for maintaining the overnight fleet over a period of 15 years, using the facilities that the manufacturer has established in Egypt to maintain, over eight years, the six 15-car trains for ENR daytime services that it is supplying under a €158m contract awarded in April 2019.

This fleet has now completed its first phase of trials on ENR infrastructure, Talgo says, and will be deployed on the core Alexandria – Cairo – Aswan main line.

Separately, Talgo has signed an agreement with the Ministry of Transport and National Egyptian Railway Industries (NERIC) to examine the feasibility of establishing a passenger rolling stock manufacturing facility in Egypt.

The government is hoping to establish Egypt as a major rolling stock production centre in order to meet the demands of its major rail and metro projects, and to save the hard currency required to purchase trains from abroad.