THE Russian Railway Research Institute (VNIIZhT) has signed a supplementary agreement with Talgo to define the services it will provide during the project to develop Talgo passenger coaches for use on 1520mm-gauge infrastructure. 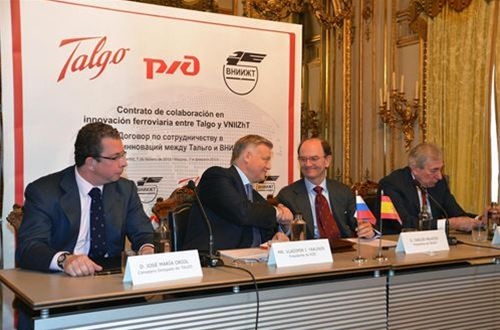 The contract, which was signed on February 7, follows January's agreement between Russian Railways (RZD) and Talgo to adapt the Spanish manufacturer's equipment for operation on Russia's passenger network as RZD strives to replace much of its passenger coach fleet by 2030.

The first stage of this adaptation comprises basic engineering which includes the development of technical specifications for Talgo passenger trains, as well as terms of reference, calculations, individual component tests, and the development of design documentation. VNIIZhT will provide advisory services on the requirements of the 1520mm gauge, and examine the calculations and design documentation as part of this initial work.

The contract was signed at the headquarters of the Spanish Railways Foundation by Mr Boris Lapidus, president of VNNIZhT, and Mr Jose Maria Oriol, Talgo CEO, in the presence of Mr Vladimir Yakunin, president of RZD, and Mr Carlos Palacio Oriol, president of Talgo.

Yakunin says that recently-completed research trials between Talgo and VNIIZhT found that the company's tilting technology could offer a significant increase in passenger train speeds on existing infrastructure in Russia. Talgo's automatic gauge-change system is also set to be adapted to winter conditions while its brake systems will be configured for 1520mm-gauge operation under the agreement.

"We expect the Talgo high-speed train to be an additional resource for rapid transport," Yakunin says. "Such a resource is in particular demand due to the integrated transport services required for the 2018 World Cup."