CHILTERN Railways reached a key milestone on the construction of its new link to Oxford on the morning of September 28 with the first driver training run over the new 1km chord at Bicester, which connects the London Marylebone - High Wycombe - Banbury line with the Bicester – Oxford line. 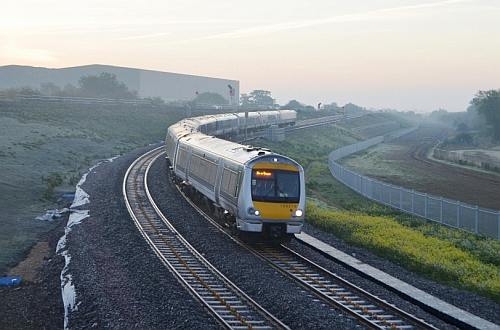 In addition to construction of the chord, the project involved reconstruction and track-doubling on the Bicester – Oxford line, which has now been upgraded for 160km/h operation. Two new stations have been constructed at Bicester Village, near the former Bicester Town station, and Oxford Parkway, a park-and-ride facility situated alongside the A34 highway at Water Eaton north of Oxford. The existing station at Islip on the Bicester - Oxford Line has also been rebuilt and 37 level crossings have been eliminated.

Chiltern is contributing £130m to the £320m project through its franchise agreement with the Department for Transport (DfT), which runs from March 2002 to December 2021.

From December, Chiltern will operate two fast services per hour from London Marylebone to Bicester Village and Oxford Parkway, with a journey time of around an hour. These services are due to be extended to Oxford in March 2016.

The upgrading of the Oxford – Bicester line is the first phase of East – West Rail, which will reinstate the cross-country link from Oxford and Aylesbury to Bletchley.