OPEN-ACCESS long-distance operator Thello announced on October 30 that tickets have gone on sale for its new Marseilles – Milan service, which is due to begin operating next month. 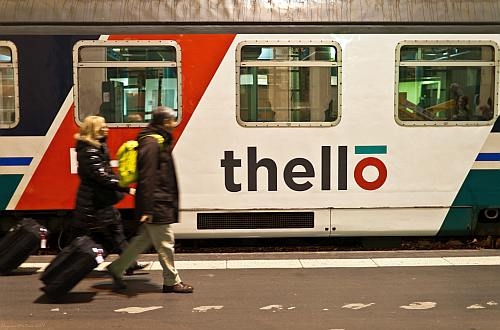 The daily service will call at Nice, Monaco and Genoa and each train will be formed of 1 or two first class coaches and six or seven standard class vehicles providing a total of 450-600 seats depending on demand. Thello says the recently-refurbished rolling stock will be provided by Trenitalia.

The first Milan – Marseilles service will run on December 14, with Marseille – Milan services set to start the following day.

Tickets will be available online and at Trenitalia ticket offices, as well as Thello self-service ticket machines, which will be installed at Marseilles Saint-Charles, Toulon, Nice, Monaco, and Menton stations in time for the launch.

Thello plans to launch two additional Nice – Milan services next April, increasing the service to three trains per day on this section of the route.

After a difficult year in 2013, which concluded with the withdrawal of its Paris – Rome overnight service in December, the Transdev-Trenitalia joint venture says traffic levels are looking positive with 345,000 passengers using its trains so far this year, a 12% increase compared with the same period in 2013.