Three dead and 50 injured in Amtrak derailment in Montana

The Empire Builder train was travelling from Chicago to Seattle and Portland derailed near Joplin, Montana. 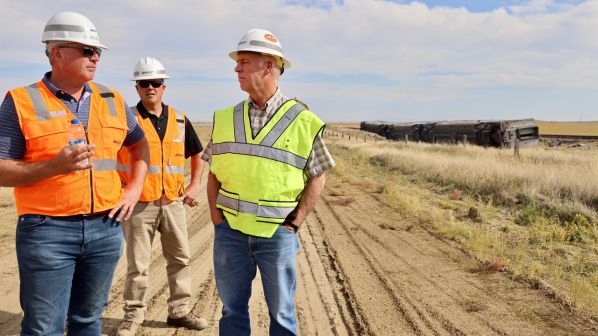 AMTRAK’s Empire Builder train travelling from Chicago to Seattle and Portland derailed near Joplin, Montana, at around 16.00 on September 25, killing three people and injuring around 50 others.

The train comprised two locomotives and 10 coaches, eight of which derailed. Amtrak says around 141 passengers and 17 crew members were onboard at the time of the accident, which occurred on the BNSF network around 5km west of Joplin. The New York Times reports that the train was travelling through an apparently flat and straight section of the route, which was last inspected on September 23.

The National Transportation Safety Board (NTSB) said on Twitter that it was “launching a go-team” to investigate the derailment, and would be holding a media briefing on September 27. BNSF also told IRJ’s sister publication Railway Age that it is working closely with Amtrak and local authorities and had deployed personnel to the site

“We are deeply saddened to learn local authorities are now confirming that three people have lost their lives as a result of this accident,” Amtrak says. “There are also reported injuries among the passengers and crew members travelling on the train. Amtrak is working with the local authorities to transport those who were injured to medical care, and to safely evacuate everyone else at the scene.

“Our incident response team has been initiated, and we are sending emergency personnel and Amtrak leadership to the scene to help support our passengers, our employees and their families with their needs.”

The derailment is also being investigated by the Federal Railroad Administration (FRA), which dispatched a team of 18 technical experts to the scene from core safety disciplines including track, motive power and equipment, signal and train control, and operating practices. “We have initiated a thorough forensic investigation and analysis in support of the NTSB examining all potential causal and contributing factors,” says deputy administrator, Mr Amit Bose.

“We are in mourning today for the people who lost their lives … as well as the many others who were injured,” says Amtrak CEO, Mr Bill Flynn. “We have no words that can adequately express our sorrow for those who lost a loved one or who were hurt in this horrible event. They are in our thoughts and prayers.

“We are fully cooperating with the investigation, working closely with NTSB, the FRA, local law enforcement and response agencies. We share the sense of urgency to understand why the accident happened; however, until the investigation is complete, we will not comment further on the accident itself. The NTSB will identify the cause or causes of this accident, and Amtrak commits to taking appropriate actions to prevent a similar accident in the future.

“Amtrak’s immediate and sustained focus is on doing everything we can to help our passengers and crew, especially the families of those who were injured or died, at this painful and difficult time. Our incident response team has been initiated. We have sent emergency personnel and Amtrak leadership to the scene to help support our passengers, our employees and their families with their needs.”