Tibet railway among new lines to open in China 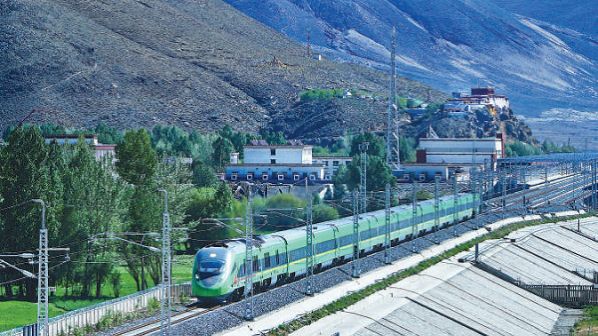 THE Lhasa - Nyingchi section of the Sichuan - Tibet Railway was among the lines to open on June 25 to coincide with the 100th anniversary of the founding of the Chinese communist party.

Running for 435.48km, the single-track electrified Lalin Railway is located in the southeastern Tibet valley between the Gangdise Mountains and the Himalayas on the Qinghai-Tibet Plateau, running from Lhasa, the capital of Tibet, to Nyingchi. The 160km/h line serves nine stations connects with the existing Lari and Qinghai-Tibet railways. It is part of the larger Sichuan-Tibet railway, which remains under construction.

The line is Tibet's first electrified railway and is served by 31 new Fuxing Plateau bi-mode multiple units, capable of operating on electrified and non-electrified infrastructure. The 12-car trains were developed by China Railway (CR) alongside local manufacturers and are specially adapted to the extreme conditions experienced on the railway. They feature power cars fitted at either end of the train and have capacity for 755 passengers split across first, second and commercial classes. A combination of diffusion and distributed oxygen are installed to supply passengers with a comfortable riding experience when travelling at high altitudes and in long tunnels.

Construction on the project got underway in 2015 and proved extremely challenging, with more than 90% of the line running more than 3000m above sea level. The line crosses the Yarlung Zangbo River 16 times and required the construction of 47 tunnels and 121 bridges, including the Milin tunnel, one of six 10km tunnels constructed on the most difficult part of line. Milin tunnel is about 1200m below the surface and has an average altitude of 3100m.

The southeast of the Qinghai-Tibet Plateau experiences some of the strongest movements of the earth’s crust in China. China Railway says it has introduced various prevention and control methods to minimise the risk of geological disasters, including the use of comprehensive safety response mechanisms.

CR says the new line will offer a reliable form of transport in southeastern Tibet, an area that has been difficult to reach because of the challenging terrain, helping to boost tourism to the region as well as improving access to freight services for local farmers and businesses.

Elsewhere, the 235km Taizhou - Jinhua railway opened for service on June 25th with the departure of a CR200J specially-branded "Green Giant" series 160km/h EMU from Taizhou West station on the coast of Zhejiang province to the south of Shanghai. The line continues west to Jinhua county in the centre of the province, reducing the journey time between the two cities by an hour to approximately 1h 30min.

In Jinhua county the line starts at Yongkangnan station where there is interchange to the Jintai to Wenzhou passenger and freight lines, and proceeds via 13 intermediary stations to Taizhounan, where a connection is available to the Hangzhou - Shenzhen line. Trains pass over 70 bridges and through 58 tunnels en route. Built at a cost of Yuan 20bn, construction commenced in April 2016.

Operation is due to start by the end of 2021 according to local media reports.

The line is 226.9km long and has a 350km/h design speed and will reduce current journey times from two hours to one. The line is among the first batch of public-private partnership pilot projects in China.

When it opens the new line will be part of a network in the Yangtze River Delta that will connect the urban areas of Hangzhou with coastal cities. It will also enable Taizhou and Wenling to join the Yangtze River economic belt thereby increasing the integrated development of the area.