COMMERCIAL services began running through Switzerland’s Gotthard Base Tunnel with the start of the 2017 timetable on December 11, resulting in shorter journey times for passengers and freight customers along the north-south Gotthard corridor. 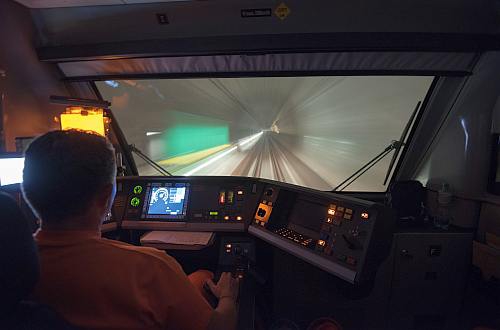 The 57.1 km tunnel was handed over by constructor AlpTransit to Swiss Federal Railways (SBB) in June, and this was followed by an intensive period of testing.

The timetable change means that passengers’ journey times will be cut by around 30 minutes, and freight services will have their train path capacity raised from 180 to 210 trains per day.

Only air-conditioned ICN and ETR 610 multiple units will use the Gotthard Base Tunnel until late 2019 when they will be joined by the new Stadler Giruno trains.

The number of Zürich to Milan services has increased from seven to eight per day with journey times reduced by 37 minutes to 3h 36min. The new timetable also includes a new Basle - Arth-Goldau - Milan service.

Direct services between Zürich and Venice will be introduced in June 2017.

SBB also introduced panoramic services on the original Gotthard mountain route from December 11, with trains running from Basle, Lucerne and Zürich and RegioExpress trains from Ticino now operating to Erstfeld and back every hour.

Peak time direct through connections from Basle and Zürich to Göschenen are also being retained.

The first timetabled train through the Gotthard Base Tunnel was the EuroCity 11 which left Zürich on December 11 at 06.09 for southern Switzerland. It was carrying guests including director of the Swiss Federal office of Transport Mr Peter Füglistaler and SBB CEO Mr Andreas Meyer.

Lugano station then played host to the official ceremony marking the opening of the Gotthard Base Tunnel in an event entitled “Switzerland comes together.” Füglistaler and Meyer joined president of Uri Cantonal Council Mr Beat Jörg and many other guests to celebrate the longest railway tunnel in the world opening for service.

The modernised Lugano station was also opened. SBB and the cantonal and city authorities spent a total of SFr 23m ($US 22.6m) on the refurbishment.

When the Ceneri Base Tunnel and the 4-metre corridor are operational freight capacity will be increased on the Gotthard corridor to 260 trains per day and journey times for Switzerland - Italy passenger services will be cut by up to an hour. Trains will run between Switzerland and Ticino every half hour while Zürich - Milan services will run hourly.

A new Lugano - Locarno express will be operational by the end of 2020, and journeys on the Leventina district - Lugano/Mendrisiotto line will be up to 30 minutes faster.

Ticino will receive an investment of over SFr 2bn from SBB by 2030.