SCOTTISH cabinet secretary for infrastructure Mr Keith Brown joined contractors at Tweedbank station on February 12 to attach the final rail clip on the Borders Railway, marking the completion of tracklaying on the 48km line from Newcraighall, south of Edinburgh. 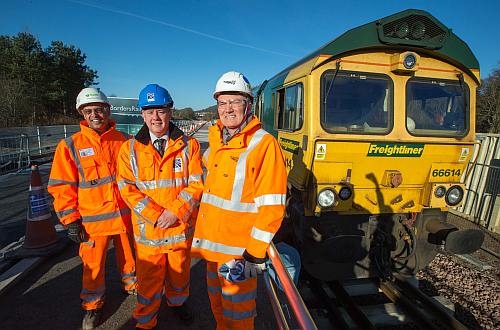 The £294m non-electrified line will open in September, restoring rail services to an area isolated from the network since the closure of the Edinburgh – Carlisle Waverley Route in 1969. Around 90% of the new railway uses the alignment of the abandoned line.

Tracklaying began in August and more than 1000 108m-long sections of rail and more than 9500 sleepers have been installed on the route.

With track now in place, Network Rail and principal contractor BAM Nuttal will focus on completing ballasting, installation of signalling and telecommunications equipment, and fitting out the seven new stations at Shawfair, Eskbank, Newtongrange, Gorebridge, Stow, Galashiels, and Tweedbank.