TRENITALIA has been awarded concessions to operate passenger services in the Umbria and Valle d'Aosta regions of Italy. 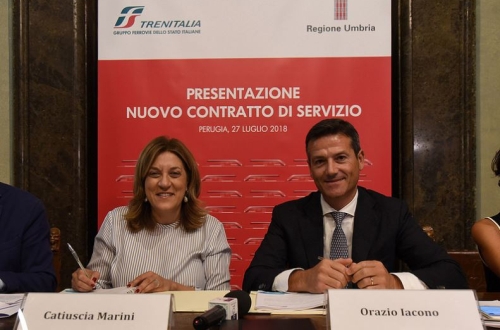 The Umbria Region Service Contract, valid until 2032, was signed in Perugia on July 27 by Ms Catiuscia Marini, president of the Region of Umbria, and Mr Orazio Iacono, Trenitalia CEO.

Trenitalia says the 15-year contract will allow it to invest in Umbria’s trains, with more than €236m available to renew up to 80% of the fleet. This includes the purchase of 12 new trains for approximately €192m, of which €8.5m will be financed by the Umbria Region, and an additional €44m for refurbishment, train maintenance, IT and technology and plant upgrades.

A new version of Trenitalia's smartphone app will offer a wider range of features including geo-localised stations, arrivals and departures, and favourite travel settings.
Trenitalia has also been awarded an €86.7m, five-year contract to operate the regional rail transport service in Valle d'Aosta, with an option to extend the concession by five years which would increase the value of the contract to €179m.

Arriva, a subsidiary of German Rail (DB), also competed for the tender which was issued on September 1 2017, but its bid was considered unsatisfactory both for technical and economic reasons.

The contract starts in 2019 and includes regional services on the Aosta - Turin and Aosta - Ivrea lines and, after its re-opening, on the Aosta - Pré-Saint Didier line totalling 1.65 million km per annum.
Additional services in the contract include fare integration, the opening of ticket offices and a communication system based on Italian, French and English.

Five new bi-mode Flirt multiple units built by Stadler in 2017 will operate on the Aosta - Turin line. The bi-mode Flirt is equipped with a power module, which houses the two Deutz V8 diesel engines, the fuel tank, and additional drive equipment. The 66.8m-long train has a maximum speed of 160km/h under electric power and 140km/h in diesel mode.