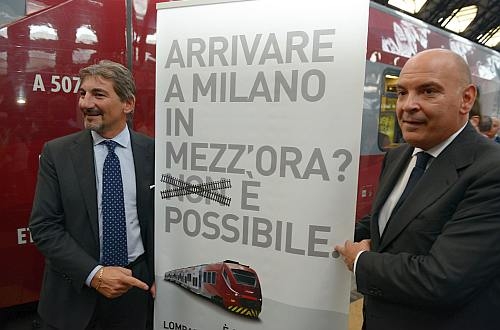 Lombardia Express serves Varese and Bergamo with a morning train to Milan and an evening return. The service has cut the fastest journey time between Varese and Milan Porta Garibaldi from 52 minutes to 35 minutes, while Bergamo – Milan Central has dropped from 48 minutes to 38 minutes. Unlike existing regional services on these routes, the new trains operate without subsidy from the Lombardia region.

Tickets can be booked online or by mobile phone, and include a free newspaper on the morning train and discounted parking at stations. A single ticket between Milan and Varese costs €12.00, compared with €8.50 for a first class ticket on a normal regional service.

Lombardia Express services are operated by five-car 160km/h Alstom Coradia Meridian emus, which seat up to 230 passengers. FNM announced on September 24 that it has ordered 10 additional trains from Alstom in a contract worth €67m, with delivery scheduled for early 2014.