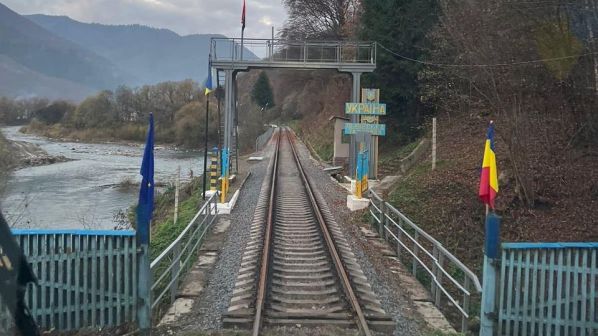 UKRAINIAN Railways (UZ) has conducted the first trial run on the cross-border Rakhiv - Dilove - Valea-Viseului railway to Romania after Romanian infrastructure manager CFR Infrastructure completed work to upgrade its portion of the route.

Trains last operated on the 1520mm-gauge line 16 years ago and work by SRCF Cluj, a regional division of CFR, completed on October 16, included the replacement of 1400 wooden sleepers and 36 tonnes of ballast while 400 tonnes of new ballast was installed. UZ completed upgrades of the 19.3km section from Rakhiv to Berlebash at the border in August.

UZ hopes to relaunch a twice-daily Rakhiv - Valea-Viseului passenger service in December using DPKr-3 regional trains built in Ukraine. The train will offer a journey time of around 40 minutes and border and customs control will be carried out onboard the train. Passengers will be able to change to standard-gauge CFR services at Valea-Viseului where trains operate to Siget, Cluj and Bucharest.

“Since the beginning of the year, since the beginning of the war in Ukraine, CFR SA has been making constant efforts to cope with the increase in the capacity of passenger and freight rail transport, registered both at the border points on the border with Ukraine (Khalmeu and Vikshan), as well as those located on the border with the Republic of Moldova (Cristesti Gija, Sokola, Felciu and Galac Large),” CFR said in a statement, adding that it is also working to enhance capacity at stations to boost cross-border traffic.