THE government of New South Wales has confirmed that it has awarded the Northwest Rapid Transit consortium a $A 3.7bn ($US 3.48bn) operations, trains and systems contract for Sydney's $A 8.3bn North West Rail Link (NWRL), which includes a €298m rolling stock and signalling deal with Alstom. 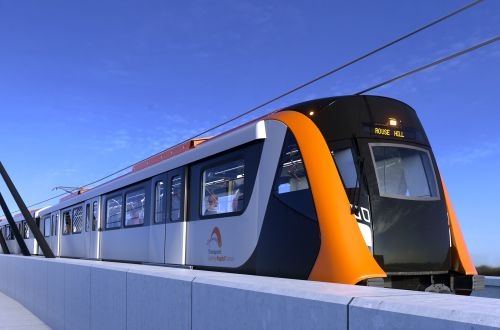 Alstom will supply 22 six-car automated Metropolis trains for the 37km line along with its Urbalis 400 communications-based train control (CBTC) system. It will be responsible for project management, design, supply, manufacturing, testing and commissioning of the rolling stock and the signalling system.

Alstom says the Metropolis trains have been adapted to Sydney's needs. They will feature three sets of double-doors per car for improved passenger access and flows, CCTV, emergency intercoms, the latest passenger way finding aids for customer information, and real-time travel information.

The consortium, which was selected as the preferred operator in June, consists of MTR Corporation Australia, John Holland, Leighton Contractors, UGL Rail Services and Plenary Group.

In addition to rolling stock and operation of the line for 15 years from its opening in 2019, the consortium is responsible for constructing the line's eight stations, building and operating the stabling and maintenance facility at Tallwaong Road, and upgrading and converting the existing 14km railway between Epping and Chatswood for rapid transit operation.

On announcing the contract, NSW premier Mr Mike Baird and minister for transport Mrs Gladys Berejiklian confirmed that NWRL trains will operate every four minutes during the peak.

"At the start of operations, the NWRL will use six-car trains, however, more cars and trains can be added as demand increases, with the platforms to be built long enough for eight-car trains," Berejiklian says.

Tunnelling work on the 15km underground section between Epping and Bella Vista commenced last week while work on the 4km elevated Skytrain section between Kellyville and Rouse Hill got underway in June. The remaining 4km between Bella Vista and Kellyville and Rouse Hill and Cudgegong will run at grade. The entire line is expected to open in 2019 as the first stage of the recently-announced Sydney Rapid Transit network.