ACCIONA is preparing a tunnel boring machine (TBM) in Noblejas, Spain, which will be used to excavate the first metro line in Ecuadorian capital Quito. 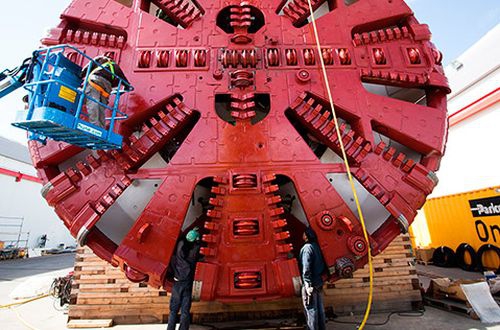 The 1660-tonne machine is the first of the three TBMs which will be used to construct Line 1. The other two will be prepared and checked in Germany.

The machine is 9.3m high, and is capable of boring through the earth at an average speed of 15 - 18m per day. It will excavate a 4km section, advancing non-stop 24-hours a day.

The machine is being tested in Noblejas before it is dismantled, shipped and reassembled on site at the portal of the future tunnel in Quito at the end of 2016. Work will begin in 2017.

The 22km Line 1 will have 15 stations, and the total contract to construct the metro is worth $US 1.54bn. The line will connect the north and south of Quito, with a journey time of 30 minutes. It will have capacity to transport around 400,000 passengers per day.

Works are expected to take three years to complete, plus six months for the systems integration and final preparation work.