The extension will run to the Muang Thong Thani property development. 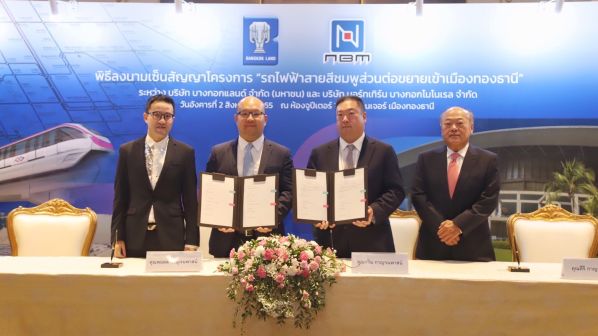 NORTHERN Bangkok Monorail (NBM) has signed a contract with property developer Bangkok Land worth Baht 4bn ($US 111.4m) to develop a 3km branch line on the MRT Pink Line to the Muang Thong Thani development.

Bangkok Land chairman, Mr Peter Kanjanapas, says the project will provide a convenient transport mode for more than 300,000 residents and workers in Muang Thong Thani as well as the 10 million visitors and participants that visit the district’s exhibitions and conferences annually.

The 34.5km under-construction MRT Pink Line is an elevated monorail line that will run in the northern part of the city from the Nonthaburi Civic Center in Pak Kret District Nonthaburi along the major east-west transport corridor of Chaeng Wattana and Ram Intra roads to terminate at Minburi District in east Bangkok. The line will have 30 stations. NBM executive director, Mr Kavin Kanjanapas, says this phase of the line will open in 2023.