THE Municipality of Amsterdam announced on January 11 that construction has been completed on the North-South Line, 15 years after work began on the project and more than a decade after it was due to open. 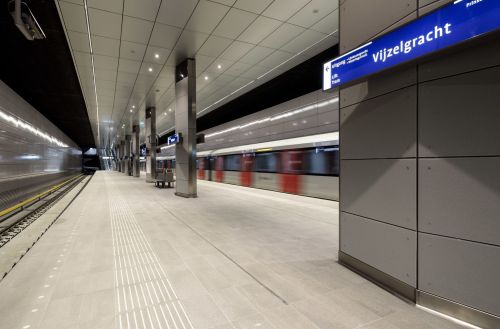 Stations and infrastructure are now ready for operation, which will enable a five-month programme of trial running to begin on the metro line next week. Revenue services are due to start on July 22.

The seven-station line runs under the historic centre of Amsterdam, and unlike previous metro lines in the city, bored tunnelling was used to thread the line beneath the streets and canals to avoid the need for demolition and reduce the risk of damage to sensitive buildings.

However, this was not entirely successful as there were two incidents of subsidence in 2008 which damaged buildings in Vijzelgracht. The difficult ground conditions and high water table meant it was necessary to ‘anchor’ tunnel sections to maintain their location.

The delays were compounded by the insolvency of one of the contractors and safety issues, which demanded additional risk management measures. This helped to push the final cost of the project up to €3.1bn.

Test runs have already taken place on sections of the 11km line, but with the completion of infrastructure, testing and integration of the overall system can now begin.