THE 4km extension of Athens’ Metro Line 3 from Aghia Marina to Nikaia was inaugurated by Greek prime minister, Mr Kyriakos Mitsotakis, on July 6, with passenger services beginning the next day. 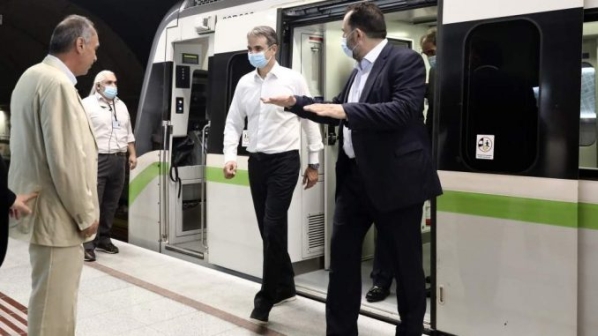 The extension, which has three stations at Agia Varvara, Korydallos and Nikaia, is expected to carry 63,000 passengers a day, resulting in 11,000 fewer trips by car and reducing CO2 emissions by 65 tonnes per day.

Services will operate between 05.30 and 00.05, with eight minute headways on the Egaleo - Nikaia section during the 07:30 - 17:30 period, compared with four minute headways between Egaleo - Doukissis Plakentias.

The project is the first phase of the 7.55km underground Haidari - Piraeus extension, which will have six stations in total, including an interchange with a transport hub at Piraeus that will connect with Line 1, commuter rail and light rail services. When completed in 2022, Line 3 will have 27 stations, with the extension expected to carry 140,000 passengers a day.

The extension provides a 14-minute journey time from Nikaia to Syntagma, and 55 minutes to the airport.

Bus routes around the extension have also been redesigned to increase transport options to the line.

The project was tendered in November 2008, and Attiko Metro signed a €344m contract with a consortium of Alstom, J&P Avax, and Ghella on March 1 2012 with the line originally due to open in 2017. Alstom had a €32m share of the contract and was responsible for design and installation of traction systems, including third rail, medium voltage supply and the distribution of low voltage power.

More than 2000 people have been employed on the project during construction.

The 1.4km western extension of Line 3 from Egaleo to Aghia Marina was officially opened in December 2013.