Trains are now running to Maniatika, Piraeus and Municipal Theatre. 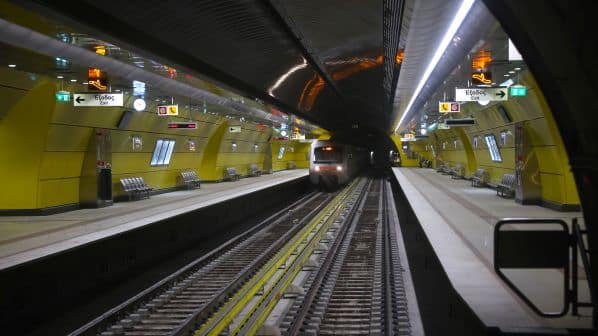 OPERATION has begun on the second phase of the €730m Athens Metro Line 3 extension, with trains now running to Maniatika, Piraeus and Municipal Theatre stations.

The full 7.55km extension built by the Avax-Ghella-Alstom consortium includes six stations, with the first phase to Agia Varvara, Korydallos, and Nikaia opening in July 2020. The opening of the second phase is expected to increase passenger numbers on the metro network by 132,000 a day, removing 23,000 private road journeys and reducing CO2 by 120 tonnes.

The line is reducing travel times between the Port of Piraeus and Venizelos International Airport from 1h 10min to 55 minutes. Services will operate at four-minute intervals on the Municipal Theatre - Dukissis Plakentias section during peak hours, reduced to every nine minutes between 22.00 and 00.20.

Line 3 now has 27 stations. Piraeus station required special construction methods to prevent sea water entering the site and to ensure the structural integrity of adjacent historic buildings. The station also serves as an interchange between lines 1 and 3, the port, the suburban railway and light rail services, with an underground passage providing access to the port under Akti Kalimassioti Avenue.

Alstom’s share of the project included design, supply and installation of the traction power systems, including third rail electrification, the medium-voltage supply and the distribution of low voltage. As part of the project, a software upgrade has been undertaken at the 76 equipment rooms already in operation on lines 2 and 3. Alstom installed its Iconis supervisory control and data acquisition (Scada) solution for metro power supply systems.

Alongside the opening of the new sections, Alstom is extending its Automatic Train Supervision (ATS) system to cover the whole of lines 2 and 3, which will improve safety and operational efficiency.

“This is undoubtedly a landmark both for us as a consortium and the city of Piraeus,” says Avax group managing director, Mr Konstantinos Mitzalis. “Despite the challenging ground conditions, the restrictions of the pandemic, the delayed delivery and increased cost of materials and lately the invasion of Ukraine, we were determined to deliver the three new stations on time as promised back in 2020, when we delivered the first three stations.”