Auckland’s City Rail Link to be expanded to increase capacity

PASSENGER capacity on Auckland’s new City Rail Link, currently under construction, is set to be expanded as a result of patronage on the city's rail network rising faster than original projections. 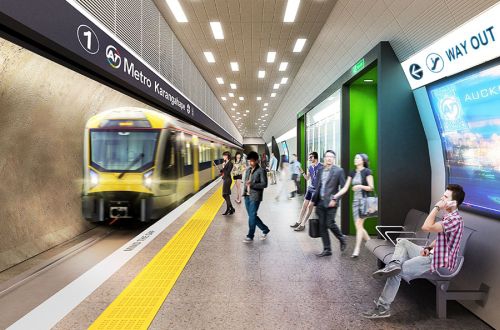 The expansion will include adding a second entrance to the new Karangahape station.

While the exact extra cost is not yet known, the current projected cost of the tunnel, stations and associated rolling stock is $NZ 3.4bn ($US 2.2bn).

The extra capacity will be achieved by lengthening the platforms of the underground stations to accommodate nine-car trains compared with the original plan to cater for three-car or six-car trains, and adding a second entrance to the new Karangahape station.

Auckland mayor Mr Phil Goff says it will be far cheaper to add the capacity now while the link is under construction than add additional capacity later.
"We've got to future-proof, and it’s a hell of a lot cheaper and less disruptive to do it now than to wait,” Goff says.

Construction is due to be completed in 2024.