THE Catalonian autonomous government has confirmed its intention to open a second section of its ambitious Barcelona Line 9/Line 10 metro project in the first half of 2016, connecting the south of the city with the two terminals at El Prat Airport. 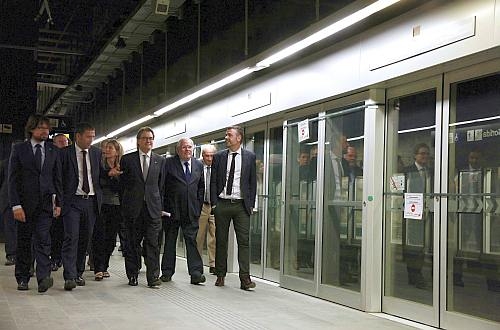 The president of Catalonia Mr Artur Mas visited the new section of Line 9 on June 4.

The 15-station section runs entirely underground between Zona Universitaria and El Prat. It has a total length of 20km, and the two tracks run one above the other in a narrow tunnel for the first 4km, with a conventional, double-track tunnel for the remaining 16km.

The infrastructure will be operated as Line 9 and will allow passengers to reach Barcelona by rail from Airport Terminal 1 for the first time. A project put forward by the Spanish government to build a short extension of the existing suburban rail line, which terminates at El Prat Terminal 2, to serve Terminal 1 has stalled due to a lack of available funds.

The Catalonian government has explained that civil works on the metro line are mostly complete and has announced that the first tests with the Alstom Metropolis trains are due to begin at the end of this year. Testing of the line in automated and driverless modes will begin next year.

The total investment in the Line 9 airport link is €2.86bn and the line is expected to carry 23 million passengers per year.

Construction is also at an advanced stage on a branch off this new section, which will link Gornal with the Zona Franca logistics park. This will operate as part of Line 10, although the government has not disclosed when it is likely to open.

The new stretch of Line 9 will be severed from the existing section of the route in the north of city and is likely to remain so for some time, as plans to bore a tunnel between Zona Universitaria and Sagrera have been postponed as a result of deficit constraints.

The initial phase of Lines 9 from Sagrera to Can Zam opened in late 2009, while the first section of Line 10 to Gorg was inaugurated in April 2010. The two lines serve 12 stations and have a total length of 11km.

The lines were the first in Spain to feature full automated train operation (Grade of Automation or GaO 4) and were constructed at a cost of €1.47bn.

When the link between Zona Universitaria and Sagrera is finally completed the route will be 50km long with 54 stations. The total cost of the overall Line 9/Line 10 project is estimated to be €5.95bn.