THE Barcelona metro network was extended by 20km on February 12 with the opening of the southern section of the automated Line 9 from Zona Universitària to El Prat International Airport, 10 years after construction began on the €2.9bn project. 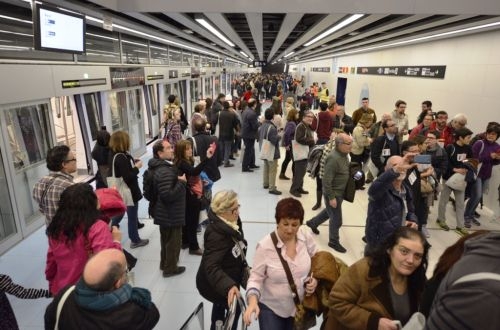 The 15-station section of Line 9 is El Prat's second rail connection after the existing suburban line, and the first to serve both of the airport's terminals. It also connects the airport with the Fira de Barcelona, a major exhibition venue, just in time for the Mobile World Congress, which will be held at the venue later this month.

Trains operate at seven-minute headways with a journey time of 32 minutes between Zona Universitària and the airport. The line serves three municipalities - Barcelona, l'Hospitalet de Llobregat and Prat de Llobregat - and ridership is expected to reach 23 million passengers per year.

Barcelona Metro is using 14 of its driverless Alstom series 9000 trains, which have a maximum speed of 80km/h and operate at a commercial speed of 37km/h on the new line.

The new section is branded Line 9 South as it is isolated from the 11km-long northern section of the line from Sagrera to Can Zam (and Line 10 to Gorg), which opened in 2010. Lines 9 and 10 are both part of a single project started in 2002 to create a 48km north-south link in the western part of the city, with a total investment of more than €16bn. Works to complete the remaining central section between Zona Universitària and La Sagrera have been delayed due to budgetary constraints.

A single ticket to the airport costs €4.50, including a €2.35 surcharge. According to the local passenger watchdog Promoció del Transport Públic (PTP), suburban rail will remain the fastest option to reach the airport from the city centre, using Line 9 as a shuttle between terminals.

Currently, Rodalies suburban trains from Barcelona only serve Terminal 2, although construction is underway on a 4.5km line branch with a 3.8km tunnel beneath one of the runways, which will enable a new airport express service to serve both terminals.