BEIJING expanded its metro network to 527km on December 28 with the launch of trial operation on one new line and three extensions of existing lines. 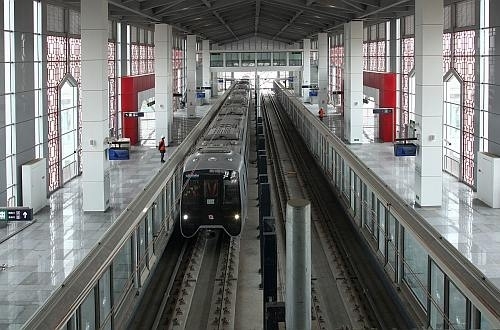 The new 23.7km east-west Line 7 runs parallel with the existing Line 1, linking Jiaohuachang in the district of Tongzhou with Beijing West mainline station. The line has 19 stations, including interchanges with six other metro lines.

Line 6 has been extended 12km east from Caofang to Lucheng, taking the total length of the east-west line to 43km. In the east of the city the 14km second phase of Line 14 from Jintailu to an interchange with Line 6 at Shangezhuang has opened, while in the north passenger services have commenced on the 10km third phase of Line 15 from Wangjing West to Qinghuadongluxikou.

With further new lines and extensions nearing completion the network is expected to reach 600km by 2016.

December 28 also brought major changes to the fares structure and the first price increase in seven years. The flat Yuan 2 ($US 0.32) fare for all journeys has been replaced by a distance-based system with discounts for students and contactless smartcard users.