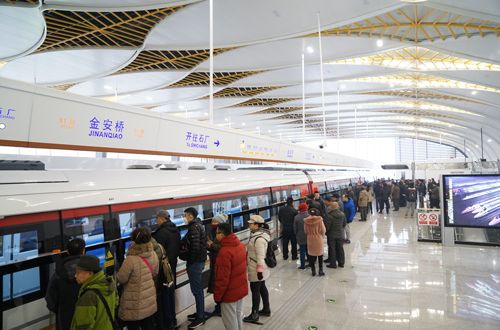 The 9km elevated maglev line serves the western part of Beijing and runs from Jin'anqiao to Shichang. The line will eventually be extended east from Jin’anqiao to connect with metro Line 1 at Pingguoyuan.

The new LRT line is called the Western Suburbs Line. The 8.6km line, which includes a 1km tunnel, runs from Bagou on Line 10 west to Fragrant Hills.

The new Yanfang Line metro line is the first in the Chinese capital to be fully automated with driverless operation using domestic technology. The 13.4km line runs from Yancun East to Yanshan. The Fangshan Line was also extended on December 30 by 1km from Suzhuang to connect with the Yangfang Line at Yancun East. A branch line is under construction on the Yangfan Line from Raoyuefu to Zhoukoudiazhen.

CRRC Changchun Railway Vehicles has supplied a fleet of Dolphin metro trains for the Yanfang Line.

In addition, new intermediate metro stations were opened at Pingleyuan on Line 14 and at Nongdananlu on Line 16.

With the commissioning of the new lines at the end of 2017, Beijing now has 22 urban rail lines totalling 608km with 370 stations.