RATP Dev will advise on design, safety and maintenance of three automated lines. 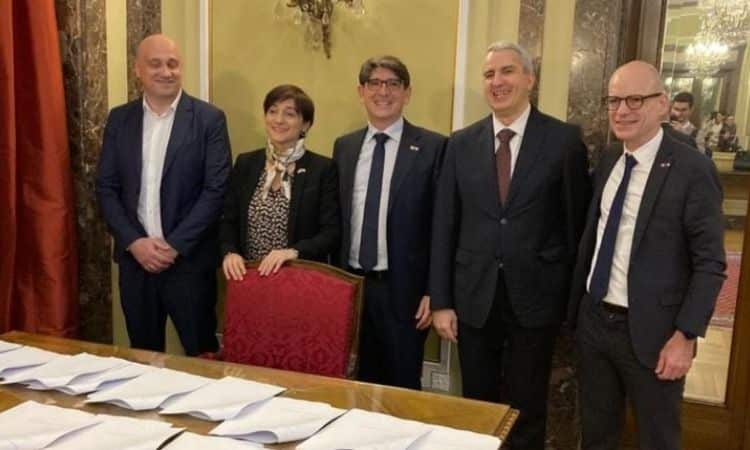 Representatives who attended the signing of the contract between the City of Belgrade, Belgrade Metro and Train and RATP Dev.
Photo Credit: RATP Dev

THE City of Belgrade has awarded RATP Dev, the international subsidiary of Paris metro operator RATP, an Early Operator Assistance contract for the automated metro that is being built in the Serbian capital.

The one-year contract has an option for a second year and covers the three lines of the Belgrade metro which are due to open from 2028. RATP Dev will assist the City of Belgrade’s Secretariat for Public Transport and operator Belgrade Metro and Train (BMV).

This will include reviewing and advising on the functional design and specification of the new metro system with a specific focus on passenger experience, safety, operations and maintenance, together with optimisation of lifecycle costs.

The contract follows the signing of a memorandum of understanding (MoU) between the City of Belgrade and RATP Dev in June 2022.

Described by BMV and RATP Dev as “the Republic of Serbia’s largest and most important infrastructure project,” the fully automated Belgrade metro is due to open in 2028 with the entry into service of Line 1 which will be 21.8km long with 21 stations.

“The inclusion of the RATP Dev company will be of great importance for the whole project since it will, with its knowledge and experience, contribute to a better and faster realisation of this very important project for our community,” says BMV acting director, Mr Andreja Mladenović.

According to mayor of Belgrade, Mr Aleksandar Šapić, the metro must become “the backbone of public transport, because Belgrade cannot withstand an increase in traffic and the number of cars.”

Šapić says that 2023 will be an extremely important year for the project as the rolling stock depot at Makiš will take shape and civil works will start towards Železnik and Bele vode. Design of the tunnel boring machine (TBM) for the project should also be completed.

“We are not late in any segment of this project, and we really have a well-founded hope that the deadlines that have been set will be met - namely that from 2028 to 2030 both lines of the Belgrade metro will come to life,” Šapić says.

Alstom and Egis are undertaking the design and systems and equipment supply work for the metro, while PowerChina is undertaking the project’s civil engineering and construction work.

For detailed data on metro projects in Europe and around the world, subscribe to IRJ Pro.