BERLIN Transport Authority (BVG) plans to set up a finance company in January to help fund the renewal of life-expired U-Bahn trains and trams and expand its fleet during the next 20 years at a cost of €3.1bn. 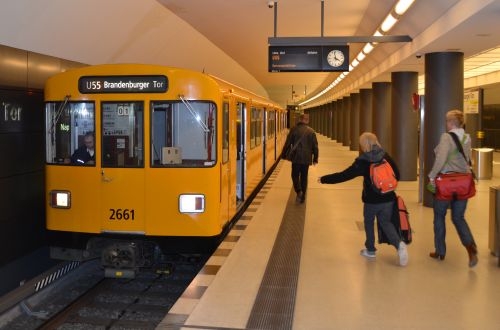 Large-profile train on Line U55 at Brandenburg Gate station.

The finance company will receive a large part of the necessary funds as loans, which will be repaid during the 35-year life of the new trains.

The finance company would receive an average of €91m a year from the state of Berlin-Brandenburg to cover depreciation and interest up to 2019. A new funding agreement is planned in 2020 which would eliminate BVG's existing debt of €800m by 2033 and call for a 7.6% expansion of services. In return, BVG would be expected to cover 55% of its costs from revenue.

BVG wants to start purchasing new trains and trams next year with a view to receiving the first new vehicles in 2020. Small-profile trains used on U-Bahn lines 1 to 4 have an average age of 24 years, while large-profile trains on lines 5 to 9 are two years older on average.

Replacement of old vehicles will cost an estimated €2.3bn, leaving €800m for investment in fleet expansion to cope with Berlin's growing population and increasing numbers of tourists.

The breakdown of investment in new rail vehicles comprises €1.6bn for large-profile trains, €720m for small-profile trains, and €660m for trams. A further €131m will spent on rolling stock refurbishment.