THE 2.2km Alexanderplatz - Brandenburg Gate western extension of Berlin U-Bahn Line U5 opened on December 4 following over a decade of construction. 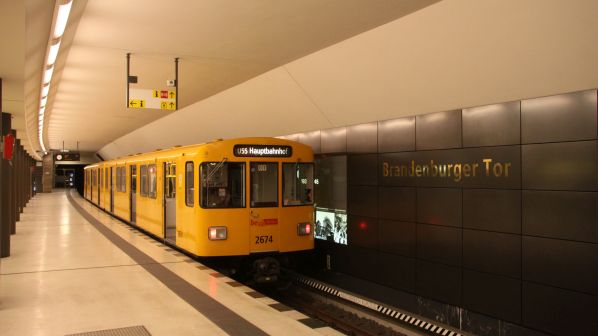 The €525m extension, which runs under the city centre, will initially have two stations at Rotes Rathaus and Unter den Linden. A third station at Museumsinsel will open in June 2021 due to delays caused by groundwater problems.

The extension connects the existing Line U5 to Line U55 and offers a direct connection between Alexanderplatz and Berlin Main Station. In addition, the extension includes a new interchange with Line U6 at Unter den Linden.

Work on the project began in 2009, with excavation of the line’s dual bore tunnels using tunnel boring machines taking place between 2012 and 2017.

Plans for the extension were first announced following German reunification, but later postponed due to financial problems. The 1.8km Brandenburg Gate - Berlin Main Station section was opened as Line U55 in 2009.

A further extension from Berlin Main Station to the former Tegel airport has been cancelled and will be replaced by a new light rail connection as part of the site’s redevelopment.