BRASILIA metro has completed the installation of a solar power plant at Guariroba station on the Green Line with the capacity to generate up to 288MWh of electricity per year, which is sufficient to supply all of the energy required by this station and another station of the same size. 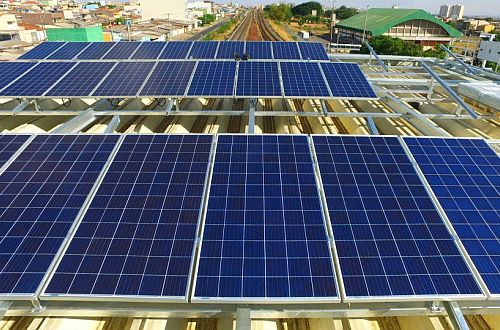 Solar photovoltaic panels mounted on top of Guariroba station on the Brasilia metro.

Energy is collected from solar panels mounted on top of the station to power lighting and other facilities on the station’s platforms and in its offices, with any surplus electricity sold to Energy Company of Brasilia. The installation will also be a laboratory for vocational training courses for school children from low-income families.

The power plant was designed by metro technicians through various stages of basic research, applied research, project design and execution. “Guariroba solar station represents an innovation for Brazil and Latin America, reducing socio-environmental externalities for the operation of the metro and contributing to the environmental and economic sustainability of the systems in the Federal District and Brazil,” says the Metro-DF’s CEO, Mr Marcelo Dourado.

Initial projections indicate that Metro-DF will get its $US 7.7m investment back within seven-and-a-half years, considering an installed capacity of 3MW and the electricity supply currently contracted by Metro-DF is around 15MW/month at an average cost of $US 1m/month.

Metro-DF is working on three other stations under its solar photovoltaic energy project.