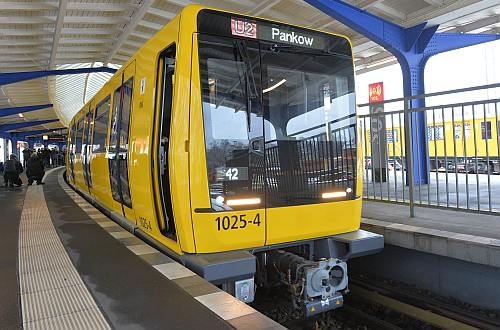 The four-car type IK train was assembled at Stadler Pankow's plant in nearby Velten, Brandenburg, and delivered by road to BVG's Machandelweg depot at the end of January.

The second pre-series train will be delivered within the next four weeks and the two prototypes will undergo three months of trials before entering passenger service in May. The trains will be evaluated in regular operation over a year and are expected to cover around 120,000km during this phase.

If trials are successful, BVG will exercise an option with Stadler Pankow for 34 production trains, which are expected to enter service from 2017 onwards.

The type IKs are intended to replace the A3L71 fleet, which dates back to 1972-73. Each 51.6m-long set will accommodate 330 passengers and seat 80, with full-width gangways and level boarding to aid accessibility.

The vehicles will be unusual in that they will feature a slightly curved bodyshell. This so-called "ballooning" will allow interior space to be optimised within the constraints of the narrow-profile tunnels. This provides a maximum width of 2.4m, 10cm wider than BVG's existing narrow-profile vehicles.

"Years of planning and development have gone into this train," says BVG CEO Dr Sigrid Evelyn Nikutta."The result is a modern U-Bahn train that offers the highest standards in terms of comfort and accessibility as well as safety and energy efficiency.