CATALONIA Government Railways (FGC) is celebrating the entry of the first two of seven new three-car class 114 trains purchased from a CAF-Alstom consortium for its standard-gauge Barcelona Metro line L7, which runs 7km from Plaça Catalunya to Avinguda Tibidabo. 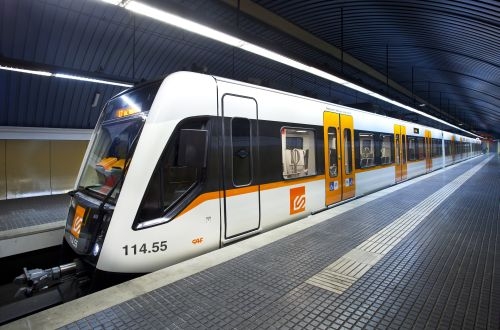 The trains entered service on December 23 following a ceremony attended by the Catalan automonous government regional minister for territory and sustainability Mr Santi Vila, and the chairman of FGC Mr Enric Ticó. FGC placed the order with Alstom-CAF in November 2009.

The 60m-long trains have a maximum capacity of 605 passengers, which is an increase of 30 over the class 111 trains that they are replacing. Each of the five new trains has been given a female name which was selected following suggestions from organisations served by L7.

The addition of the seven new trains will complete the renewal of FGC's fleet, which began with the introduction of 19 class 113 trains, also ordered from Alstom-CAF, on the Barcelona-Vallès suburban network in January. FGC says it will retain a single class 111 train for historical purposes and is set to offer components and objects from these trains for sale through eBay.