CDPQ Infra, together with the government of Québec and the City of Montreal, have announced a new $C 10bn ($US 7.8bn) automated Metropolitan Electric Network (REM) light metro network to better connect locations in the east of the city. 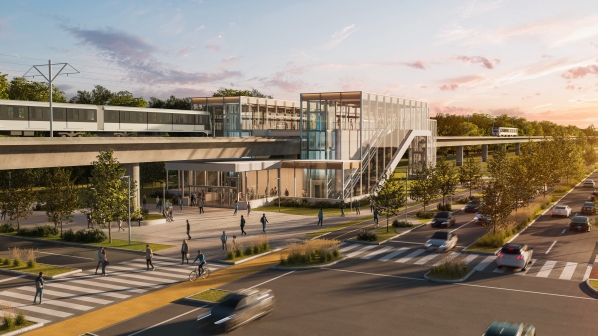 The network will consist of two lines totalling 32km with 23 stations, which will converge into a single line in the city centre.

The line includes 25km of elevated tracks and 7km of underground tracks. The line will start from Robert-Bourassa, running north adjacent to the St Laurence River to Viauville, where it will split. The western leg will run largely underground to Cégep Marie-Victorin, while the northern leg will continue over ground to Pointe-aux-Trembles.

The line will provide interchanges with the Mascouche line, green, blue and orange metro lines, and bus services, as well as the first stage of the REM network at Robert-Bourassa.

The announcement confirmed the launch of a consultation process, which includes a tour to discuss the project with the general public and project stakeholders. CDPQ Infra will also arrange technical workshops with the relevant authorities to enhance and optimise the project.

The project will be submitted to the Bureau of Public Hearings on the Environment (BAPE) for review as early as 2021.

The line is expected to reduce greenhouse gas emissions by 35,000 tonnes a year, while reducing road vehicle-km by 165 million.

The new line will extend the Montreal REM automated network to 99km with 49 stations. The 67km, $C 6.3bn project currently under construction will connect downtown Montreal to the South Shore, North Shore, West Island and Montreal-Trudeau International Airport. Work on REM began in April 2018, with partial service planned to start in 2022. Full service to all 26 stations on the REM network will launch in 2024. The driverless line is due to be electrified at 1.5kV dc overhead. Station platforms will be 80m long and equipped with platform screen doors.

The first trains for the line were delivered by Alstom in November.