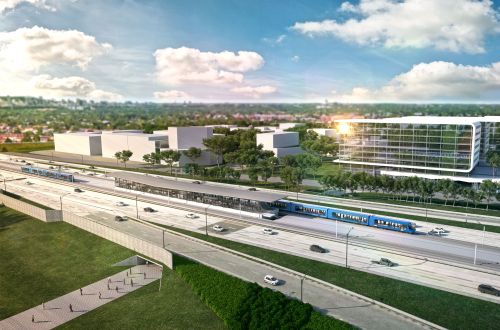 CDPQ Infra says the two selected consortia will harmonise their respective proposals in the next few months to finalise details of the schedule ahead of the start of work in the spring. Initial testing on the network is expected to take place at the end of 2020, and the first passengers will use the service in the summer of 2021.

The EPC contract is worth approximately 80% of the project’s $C 6.3bn ($US 5bn) cost, but is slightly higher than CDPQ Infra’s previous projection but falls within 5% of the preliminary estimated cost. CDPQ Infra adds that the project will not exceed its $C 0.72 passenger-km cost target and it will not require any additional investment from either the government of Quebec or the federal government, which are each providing $C 1.28bn.

The new double-track network will connect Brossard Rive-Sud in the east via downtown Montreal where it will connect with the existing Montreal metro, to Deux Montagnes in the west and Sainte-Anne-de Bellevue in the southwest, with a branch to Montreal Airport, which is not currently served by rail.

The announcement follows increasing reservations over whether the ambitious project would get off the ground. CDPQ Infra president and CEO, Mr Macky Tall, told IRJ in May 2017, that CDPQ Infra, a wholly-owned subsidiary of pension fund Caisse de deport et placement du Québec (CDPQ), expected to conclude the tendering process that summer and begin construction in the autumn.

However, doubts began to surface late last year when CDPQ Infra said that it needed more time to negotiate with bidders.

“The REM is now a reality,” says Mr Michael Sabia, president and CEO of CDPQ. “Through hard work with the consortia, we met our objectives for the REM. The network will provide frequent and fast service, making the day-to-day easier for Greater Montreal. The return from this investment will benefit all Quebecers in their retirement, and with around 65% local content, Québec companies will be actively involved in building this new network.”

The announcement that Alstom won the RSSOM contract, which is worth more than $C 1bn and will include the supply of around 200 metro cars and related equipment, is a blow to Montreal-based Bombardier, which was also shortlisted.

In a statement Bombardier said it believed its offer was both very competitive and ideally suited to meet the sustainable mobility needs of the greater Montréal area, adding that in line with the rules governing the procurement process, it will not comment further at this stage.